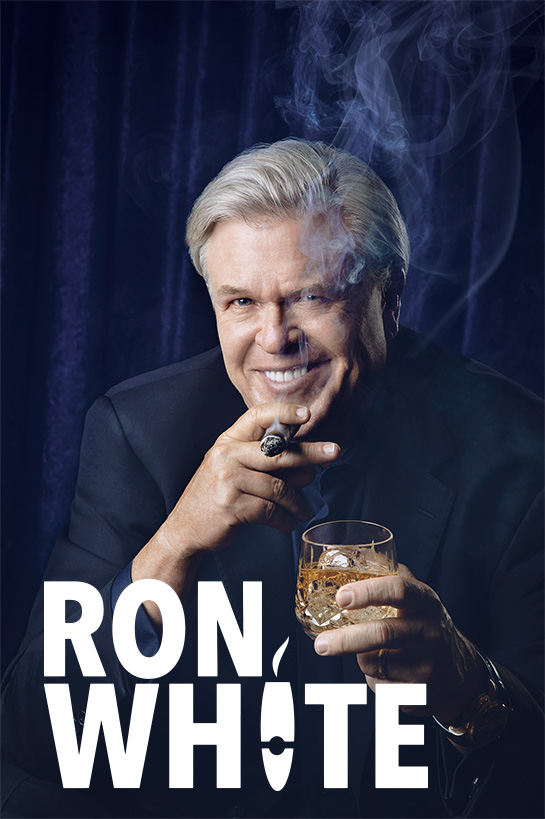 Comedian Ron “Tater Salad” White is a classic storyteller; relaying tales from his real life ranging from growing up in a small town in Texas, to sharing stories of his daily life, to becoming one of the most successful comedians in America. Ron rose to fame as the cigar-smoking, scotch-drinking funnyman from the Blue Collar Comedy Tour phenomenon, but since 2004 has established himself as a star in his own right. Over the past nine years he has been one of the top three grossing stand-up comedians on tour in America. During this time, all four of his comedy albums have charted #1 on the BillboardTM Comedy Charts. He is a three time Grammy-nominated comedian, and has sold over 10 million albums (Solo/Blue Collar Comedy Tour).

In 1986, Ron began performing comedy and was quickly opening for legendary comedians, such as Sam Kinison and Jeff Foxworthy. In 2000 as a comedy club headliner, Ron joined the Blue Collar Comedy Tour as a founding member alongside Jeff Foxworthy, Bill Engvall, and Larry the Cable Guy. Their show toured for over three years to sold-out audiences in over 270 cities and grossed more than $35 million. In 2003, Warner Brothers filmed the show, Blue Collar Comedy Tour: The Movie for a theatrical/TV/DVD/CD release. When the film premiered on TV, it was the most-watched movie in Comedy Central’s history.

Also in 2003, Ron released his breakthrough comedy CD Drunk In Public followed by his first one-hour TV comedy special They Call Me Tater Salad. The special had the highest viewership for a Sunday program in Comedy Central history. The DVD version was released in 2004. In 2005, White’s second one-hour special You Can’t Fix Stupid aired on Comedy Central to 4.5 million viewers, making it the third largest audience in Comedy Central’s history and the #1 show on primetime basic cable. The CD reached #1 on the BillboardTM Comedy Charts and remained there for 9 consecutive weeks. This success also earned Ron his first Grammy nomination. In 2005, the second Blue Collar show Blue Collar Comedy Tour Rides Again was filmed and released on TV and DVD/CD.

In 2006 Ron received his second Grammy nod for the third Blue Collar concert movie, Blue Collar Comedy Tour – One for The Road. Ron released his first book, Ron “Tater Salad” White: I Had the Right to Remain Silent…But I Didn’t Have the Ability, which landed him on the New York Times Best Seller List (Penguin Books). In 2009, his third album Behavioral Problems was released. In 2013 Ron’s fourth album, A Little Unprofessional, reached #1 on the BillboardTM Comedy Chart. All of Ron’s DVDs are certified Platinum.

Ron has been a passionate supporter of the US military troops for more than 20 years, donating time, capital, and resources. In 2008, he started his Comedy Benefit, Ron White’s Comedy Salute to the Troops, with proceeds going to the Armed Forces Foundation to assist injured troops and their families. Many of Ron’s celebrity friends have participated in these shows: Rascal Flatts, Gabriel Iglesias, Lewis Black, Dave Attell, Kathleen Madigan, Ralphie May, Brian Regan, and more. In 2011, the show was recorded for TV/DVD and was one of the top three watched shows on CMT. The taping locations have been the historic Grand Ole Opry in Nashville and The Mirage Hotel in Las Vegas.

As an actor, Ron White is a main cast member of the comedy-drama series “Roadies”, created by Cameron Crowe, where Ron plays “the most famous road manager in the music business”. Ron has also had supporting roles in the major theatrical films, Horrible Bosses, Sex and the City 2, and a principal role in Jayne Mansfield’s Car (written/directed by Billy Bob Thornton). He is also the co-Executive Producer of the documentary, Bridegroom (by award-winning Linda Bloodworth–Thomason), which debuted at the 2013 NYC Tribeca Film Festival and won the Audience Award for Best Documentary.